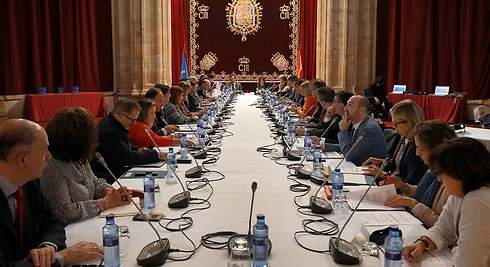 The State Technical Commission of the Electronic Judicial Administration (CTEAJE) has met again, this time, the third, in Barcelona, on February 20 under the presidency of the Secretary General of the Administration of Justice Joaquín Silguero.

The CTEAJE is a body made up of the Ministry of Justice, the General Council of the Judiciary, the State Attorney General’s Office and the Autonomous Communities with transferred jurisdiction over Justice (Andalusia, Aragon, Asturias, the Canary Islands, Cantabria, Catalonia, Galicia, Madrid, Navarre, the Basque Country and Valencia). Its main objective is to promote compatibility and ensure the interoperability of the systems and applications used in the Administration of Justice, as well as to ensure cooperation between the different Administrations.

The last meeting of the Permanent Commission of the CTEAJE took place on 20 February 2014 at the City of Justice in Barcelona.

So far, the CTEAJE has set up seven working groups, each led by different members of the Committee. During the course of the meeting, it was agreed that each member would be free to join or not each line of work that could be undertaken.

One of the topics addressed during the meeting was the Framework Collaboration Agreement for the Development and Implementation of Integrated Justice System (SIJ) Modules. The meeting also addressed various proposals from the Subdirectorate General for New Justice Technologies on the Electronic File and Document Guides, which were approved during the term of the EJIS Agreement.

It was also announced that work will begin on updating the technological inventory through a system of tokens, with the idea that each member of the CTEAJE will update its share of applications and services.

During the course of the meeting, an account was given of the progress of the five technical groups set up at the session held in January 2014 in Vitoria (Telematic Communications, Archive Management, Bulletins and Dashboard, Integration with the SIRAJ and Viewing Rooms).

In addition, the constitution of two new working groups was approved:

In addition to these seven active technical groups, an eighth will soon be added: the one on the Administration of Justice Portal.

Additionally, the representatives of the CGPJ requested to include a technical group on the Judicial Neutral Point and also on the Compatibility Test.

News from the Justizia Portal