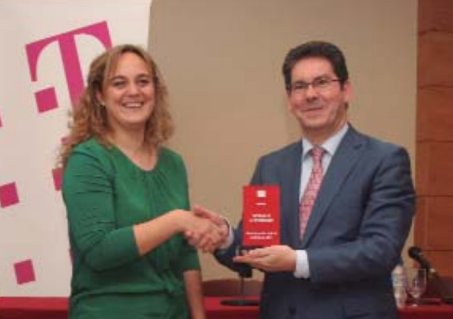 On 29 April 2014, the “e-Judicial Administration 2014” awards ceremony took place in Madrid, awarded by the Information Society Magazine. At the same time, the seminar “Information and Communication Technologies (ICT) in the Modernization of Justice (XI)” was held, sponsored by T-Systems, at the end of which the awards were presented. (pdf version) .

They were convened with a double objective: to recognize the effort and the work that is developed in the Public Administrations, and to encourage the sharing of information about the projects underway so that other public bodies can benefit from the experiences of the participants.

The call was launched on 27 March and nominations were accepted until 23 April, with the particularity that some were suggested by the readers of the magazine “Information Society” or its editorial staff.

Collaborating in the awards ceremony were Angelines Turón Turón, Deputy Director General for New Justice Technologies of the Ministry of Justice Pedro Izquierdo, Secretary General for Justice, Department of Justice and the Interior of the Andalusian Regional Government; Juan Carlos Estévez Fernández-Novoa, President of the General Council of Solicitors of Spain; América Álvarez, Head of Justice, T-Systems; and José García Méndez, Director of the magazine “Sociedad de la Información”.

On this occasion, 11 guiding themes had been established, with a special emphasis on the State Technical Committee of the Electronic Judicial Administration (CTEAJE), which hosts the main joint actions in this area with the presence of the Ministry of Justice and all the Autonomous Communities with competences transferred in the field of administration of justice.

In total, 10 applications were received from different Administrations, to which were added another 10 generic ones from organisations linked to Working Groups of the State Technical Committee for Electronic Judicial Administration (CTEAJE) and 20 equally generic ones from private companies with a significant volume of business in the field of new technologies applied to Justice.

After the end of the presentations of the seminar “ICT in the Modernization of Justice (X)“, the awards were presented, initiated by Angelines Turón Turón­, Deputy Director General of New Technologiesof Justice of the Ministry of Justice, who presented the award to the General Council of the Judiciary (CGPJ), for the Judicial Neutral Point ­project, in the persons of Juan Carlos Garcés, Head of the Judicial IT Section of the CGPJ and Victoria Cinto, Member of the General Council of the Judiciary, who had just spoken at the seminar.

Afterwards, Turón presented the prize awarded to the Regional Government of Andalusia and the Principality of Asturias for their activity in the CTEAJE Working Group on Archive Management. It was received by Pedro Izquierdo, Secretary General for Justice, of the Department of Justice and the Interior of the Andalusian Regional Government, and Fátima Rodríguez Coya, of the Department of Archives of the Government of Asturias.

Pedro Izquierdo then presented the award to the Government of La Rioja and the Ministry of Justice for the LexNet Telematic Communications System. Emilio del Río Sanz, Minister of Presidency and Justice of the Government of La Rioja, and Angelines Turón received the award. Del Río was accompanied by Cristina Maíso, Director General of Justice and the Interior, and Rosana Montañés, Head of Service. José Luis Hernández Carrión, Deputy Assistant Director General for New Justice Technologies of the Ministry of Justice, also accompanied Del Río.

Afterwards, it was the Director of “Information Society”, José García Méndez, who was in charge of the next award, which corresponded to the State Attorney General’s Office, for its project of Centralization and Exploitation of information. It was received by Francisco Moreno Carrasco, Prosecutor of the Support Unit of the Public Prosecutor’s Office.

América Álvarez, Head of Justice at T-Systems, co-sponsor of the meeting, presented the prize awarded to the Ministry of Justice and the General Council of the Judiciary for the consolidation of the CTEAJE. It was received by Victoria Cinto, Member of the CGPJ, and Marta Sánchez, Secretary of CTEAJE.

Álvarez also presented the prize awarded to the Consejo General de los Procuradores de España, for its Telematic Interconnection project. It was received by Juan Carlos Estévez Fernández-Novoa, President of the Consejo General de Procuradores de España, who was accompanied by Javier C. Sánchez García, Vice-President (who spoke at the seminar) and Antonio Álvarez-Buylla Ballesteros, Deputy Dean of the Presidency.

Finally, Angelines Turón proceeded to the presentation of the three awards corresponding to private companies, for their cooperation with the AAPP, which went to T-Systems, Indra and Everis. América Álvarez received the award on behalf of T-Systems and was accompanied by Manuel Blasco, Head of the Centre for Innovation and Transformation of Justice (CITJ), who was a speaker at the seminar. Xavier Vives, Director of Indra’s Centre of Excellence for Justice, collected the corresponding trophy, accompanied by Miguel Ángel de la Pisa, Carlos Menéndez, and Carles Castellet, all three also from CedEX. Finally, for Everis, the trophy was collected by José Ángel Pérez, Partner, who was accompanied by Diego Pascual and Álvaro León, both from the Public Sector Department