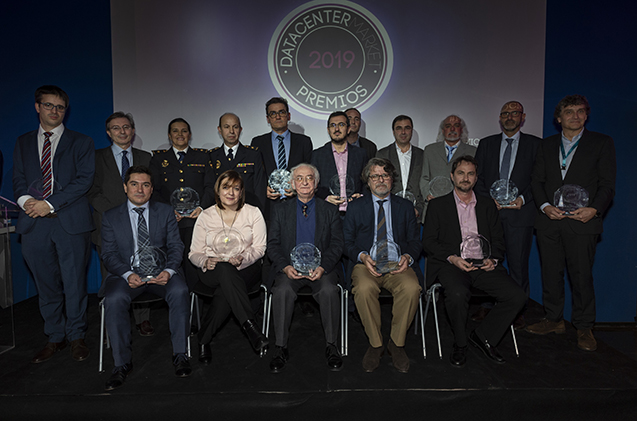 The sixth edition of the Data Center Market Awards has granted, in the event held on January 31, 2019, one of its awards to the Ministry of Justice for the Modernization Project of the Data Processing Center (DPC).

Each year, these awards highlight the most outstanding models of innovation and digital transformation affecting data centers and technology infrastructure management, such as servers and communications.

Among the contributions considered is the reduction of energy consumption leading to “Green IT” installations.

The awards, consolidated and recognized in the sector, highlight the main technological infrastructure projects carried out in Spain during 2018.

These are initiatives associated with private data centers and equipment hosting, as well as IT service providers and cloud computing services.

The SGNTJ project has stood out for its efforts to strengthen the technological capacity and provide a robust and secure architecture to the process of digital transformation of Justice with the comprehensive modernization of the DPCs and the infrastructure of the judicial headquarters of the territorial scope of the Ministry of Justice.

The lines of action have been developed by applying the latest existing technologies and are extended, among others, to Data Center, Technical Rooms, Physical Servers and Virtualization Platform, Long Duration Storage, Databases and Perimeter Security. In this way, coverage is provided for the current lines of work and future needs under the principles of efficiency, productivity and quality.

Other prizes awarded were as follows:

In the category of “Data Center Transformation Project”, Iberdrola was the winning company. Thanks to the modification of its data center, the Spanish company has gained agility in its daily operations in its own DPC, achieving greater energy efficiency and ensuring its availability.

The award for “Most Innovative DPC” went to the National Commission for Markets and Competition. The CNMC chose to deploy a new secure room solution that meets the highest security standards, guarantees business continuity and, at the same time, provides high energy efficiency.

The award for the “DPC connectivity improvement project” went to Ibercaja, following the modernisation of its data centre. This initiative consisted of changing the room distribution, the operator room, the channelling and network architecture, as well as all the LAN and SAN electronics and the copper and fibre optic structured cabling infrastructure.

Equinix has received the award as “Interconnection Project for the ECX Fabric platform”. This company has been operating for more than a year in Spain with the aim of creating the largest interconnection campus.

Sabis, an IT company belonging to the Banco Sabadell Group, has been highlighted as a “DCIM implementation and DPC control project”, with an emphasis on improving the monitoring and efficiency of its two main data centers. Its architecture focuses on five axes: reliability, security, multi-manufacturer, multi-site and technical self-sufficiency.

The award for the best “Project for the implementation of energy efficiency policies” went to BT Spain, which undertook a process of enclosing corridors, correcting installations to bring them into line with efficiency standards and optimising refrigeration with better energy efficiency, among other actions, in order to become “greener”.

As “Cloud Adoption Project“, Data Center Market has awarded easyap, a company founded in 2001 that manages between 10 and 12 million invoices per year.

In the field of “Technology management in highly critical environments“, the San Juan de Dios Hospital Order undertook a project for systems migration, monitoring, administration and operation of its technological platform. This initiative also involves the management of backup and disaster recovery solutions to respond to possible incidents and guarantee the continuity of its activity.

The “CPD of the year of a private company” went to Indra. The aforementioned technology company has a building of almost 5,000 square meters spread over four floors, of which nearly 1,000 square meters house the server room with capacity for 450 racks. In addition to this, another 700 square meters of space is available to accommodate future growth of the data center and another 370 racks.

Iberostar has been awarded as “Maintenance and operational project“. On the occasion of the construction of the new headquarters in Mallorca, the main data center is designed and built to service the group’s technological infrastructures.