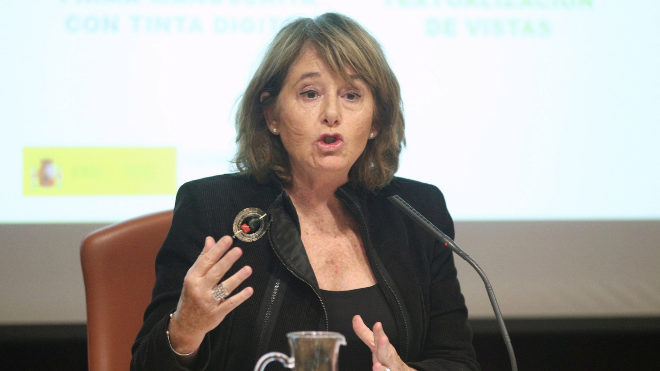 Justice launches three new technological tools to facilitate the work of judges and prosecutors: an application for automatic calculation of the accumulation of sentences, a system for textualization of court hearings and an application for digital handwritten signature with electronic ink.

On November 19, 2019, the Secretary of State for Justice, Mr. Manuel-Jesús Dolz Lago, and the General Director of Modernization of Justice, Ms. Sofía Duarte Domínguez, presented three newly developed computer applications at the Ministry of Justice, in a presentation ceremony to which the professional associations of Lawyers of the Administration of Justice were invited.

The utilities of the applications for the development of jurisdictional and procedural tasks and those entrusted to the Public Prosecutor’s Office were explained, highlighting their usefulness for other legal operators such as the lawyers involved in the proceedings. The technological progress experienced in the last eight years was highlighted and it was informed that the new projects of the Ministry of Justice take into account the utilities of artificial intelligence.

The CALCULADORA988 was presented, which automates the calculations that must be made to obtain the blocks of cumulative sentences, in application of articles 76 of the Penal Code and 988 LECrim, and to determine whether or not the accumulation of sentences is appropriate, as well as to determine the sentence to be served by the convicted person. It shows the most favorable combination for the defendant among all the possibilities.

The application starts from the sentences recorded in SIRAJ and obtains the blocks that can be accumulated in a Word document that can be included in the resolution, report or document that is being drafted. In the design of the application has been taken into consideration, in addition to the applicable legal rules, the agreement of the Second Chamber of the Supreme Court that interprets them in a unified manner dated June 27, 2018.

This calculator streamlines the management of judicial bodies, prosecutors and penitentiary institutions in relation to this matter, and increases the reliability of the process by avoiding possible errors in the calculation of accumulations. It also represents a significant saving of resources by reducing to a few seconds an operation that, in some cases, currently takes up to several days.

The implementation of this calculator, which has already been tested in the Provincial Prosecutor’s Office of Madrid, in the Prosecutor’s Office of the Supreme Court and among the magistrates of its Second Chamber, will be progressively implemented in the judicial and prosecutorial bodies under the jurisdiction of the Ministry of Justice during the first quarter of 2020.

In the second half of 2020, it is expected to be implemented in the bodies of transferred Autonomous Communities and in Penitentiary Institutions. The training for the handling of the application will be online, through the user’s attention center in the “express training” utility and also in person at each headquarters.

The computer application ELECTRONIC SIGNATURE WITH DIGITAL INK was also presented with the purpose of eradicating the scanning of documents that are signed with handwritten signatures in judicial bodies, in court appearances, minutes of acts that are not susceptible to audiovisual documentation and equivalent documents.

With this new system, the signature will be traced on a tablet, which will generate an electronic document that can be incorporated directly into the digital file.

It will begin to be used in Segovia as a pilot with twenty tablets. Its implementation will be progressive in the judicial bodies and prosecutors’ offices of the autonomous communities of Castilla-La Mancha, Castilla y León, Extremadura, Illes Balears, Region of Murcia and the autonomous cities of Ceuta and Melilla and will also involve a significant investment in hardware for the provision of the necessary devices.

Finally, the TEXTUALIZATION OF HEARINGS computer application was presented, which allows to obtain in an automated way the text of the oral interventions made in trials, hearings and recorded appearances. For the results to be effective, it is necessary to feed the application with phrases and idioms so that it can detect turns of phrase, speech and idiomatic peculiarities and reflect them adequately in the textualization. Thus, it was reported that it has been “learning” in the courtrooms of Cuenca so that it can begin to perform as an application. As useful functionalities, it allows keyword searches and the copying and pasting of text obtained from other documents.

The event included the presentation of the computer applications and their positive assessment by the representatives of the Ministry of Justice.

Dolz emphasized the savings in “intellectual energy” that this new package of applications will mean for the judges, especially when it comes to calculating with precision, without having to do “the old bill”, the prison sentence that a prisoner with several accumulated sentences has to serve.

With experience as a prosecutor in the Supreme Court, Dolz recalled that during the reviews of acts came to discover “undue extensions of imprisonment”, a circumstance that was “a real headache” because there were numerous cases in which “the fundamental right to freedom” was violated.

For her part, the head of the Modernization area took advantage of the brief explanation of each of the applications to emphasize that although these novelties do not replace the common ways of working in the judicial career, they will serve as an “aid” to the courts, prosecutors’ offices and to all the officials of the Administration of Justice.

When asked whether the implementation of these applications would be extended to the organs of the autonomous communities with transferred competences, it was reported that the different administrations cooperate by providing their IT solutions through the CTEAJE (State Technical Committee for Electronic Judicial Administration).