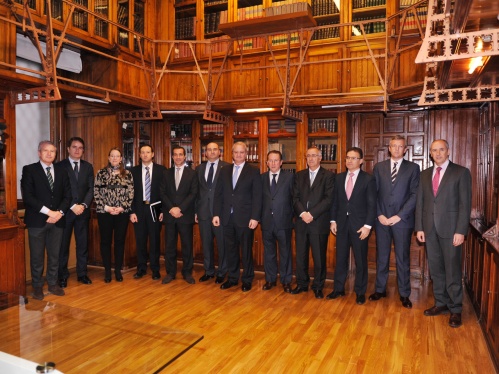 The Ministry of Justice is making progress in the implementation of the New Judicial Office in the autonomous communities without transferred competence in relation to the deployment of infrastructures to support the administration of justice.

The Ministry of Justice has informed last December 16, 2013 to the representatives of the autonomous communities that have participated in the Sectorial Conference on the progress that has been made over the last year in terms of modernization and interoperability and on the development of the New Judicial Office.

After detailing the situation of the last implementation in Ceuta, where the period of stabilization and implementation can already be considered closed, the ministerial representatives have guaranteed that they will continue to promote its development and have detailed that the work is already well advanced in four autonomous communities.

Thus, before the end of the legislature, the objective is that in Melilla, Palma de Mallorca, Plasencia and Ponferrada already have the New Judicial Office, a model that although it advances without haste, it does so progressively and with success, as was demonstrated last November when the European Commission decided to finance a project for Spain to export this model to Croatia. Likewise, in Murcia, a pioneer in the implementation of the NOJ, it will be extended to civil jurisdiction.

Among the issues related to the interoperability of the different technological systems, the Ministry has reported on another of the highlights of this past year: the constitution last July of the State Technical Committee of the Electronic Judicial Administration (CTEAJE), whose objective is to achieve global interoperability, the result of a comprehensive process, where information systems have full capacity to share data and enable the exchange of information and knowledge between them.

The results obtained by different working groups, in which different autonomous communities, the Ministry and the General Council of the Judiciary participate, were also discussed, as well as the collaboration agreements signed and being processed, such as the one between Justice and the public business entity Red.es for the Strategic Coordination and Development of Advanced Services in the field of Information Technologies in the Administration of Justice, with which the aim is to generalise the electronic dossier.

Through this agreement, Justice has planned a contribution of 1.1 million euros between 2014 and 2015, to which must be added the 1.5 million contributed by Red.es through ERDF cohesion funds. These amounts will be invested in the development of the Integrated Justice System and its implementation in Extremadura and Castilla-La Mancha.

The Integrated Justice System aims to develop a procedural management system, which gradually replaces the current Ministry of Justice territory and is available to all Administrations with powers in the field of Justice to complement their own.

On the other hand, the Ministry of Justice has proposed to the autonomous communities to assume the extra cost of the application of the new Law on Free Legal Aid, in which the number of beneficiaries has been increased. This increase in the cost has been produced by raising the thresholds within which this service can be requested and by incorporating groups of particularly vulnerable victims regardless of their income.

During the meeting, the ministerial representatives explained to the regional representatives that free justice was already financed at the time of the transfer of Justice, so that any indiscriminate contribution would imply double financing. The General State Administration will cover the higher cost generated by the law.

With the aim of guaranteeing an equitable application of the rule, a maximum increase in the contribution of each community will be foreseen. As a reference, the average variation registered by the communities in the Ministry’s territory (Extremadura, Castilla-La Mancha, Castilla y León, Murcia and the Balearic Islands) will be taken as a reference, and it will be established that the contributions received by the rest can reach up to three times that percentage of variation.

This measure will ensure, according to the Ministry, that free justice is provided homogeneously throughout the national territory, with the State providing sufficient resources to cover the cost increases caused by Royal Decree-Law 3/2013, of 22 February, which modulated the amount of fees and brought forward the entry into force of the new features to be included in the future Law on Free Legal Aid.

Throughout 2014, the data from the communities corresponding to 2013 will be received and analysed, and the amounts that will have to be paid to each one of them will be included in the General State Budget Law for 2015.

The Draft Bill on Free Legal Aid, approved in January 2013, increases for the first time since 1996 the number of beneficiaries of free justice by increasing the economic thresholds of access (the threshold is increased from 14,000 to 15,000 euros per year, 2.5 times the IPREM) and the groups that will be able to benefit from this service.

The groups that become beneficiaries of free justice regardless of their income are victims of gender violence; terrorism; human trafficking; minors and the mentally handicapped who have been victims of abuse, and victims of accidents with permanent consequences who claim compensation for damages.

Likewise, the Ministry of Justice has informed the different autonomous communities about the Draft Royal Decree that in the first half of 2014 will give the green light to the Forensic Medical Council, an old aspiration of the group of forensic doctors, and which will be constituted as a technical body for consultation and advice for the Public Administrations, the Institutes of Forensic Medicine and the Administration of Justice.

Through this Council, the Institutes of Forensic Medicine, the Forensic Medical Institutes, the National Institute of Toxicology and Forensic Sciences and other bodies will be coordinated in order to establish common protocols for carrying out the different expert opinions in specific cases.

The Plenary of the Council will be made up of representatives of all the administrations and institutions that can obtain studies and opinions and a Scientific-Technical Committee made up of forensic doctors from different specialities who will be responsible for drawing up the scientific proposals and reports.

During the sectorial meeting, the Ministry also informed the representatives of the different autonomous communities of the legislative reforms it is working on, especially the Organic Law of the Judiciary, which will be submitted as a draft bill to the Council of Ministers in the coming weeks.