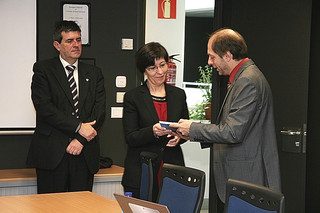 The Ertzaintza has been the institution chosen to be responsible in 2016 for the organization of the annual meeting of the ENFSI, the European Network of Forensic Science Institutes that coordinates 64 police and forensic reference laboratories from 36 European countries. The designation of the Ertzaintza, agreed at the meeting of 22 and 23 May 2014, corresponding to the twenty-sixth edition, which was held in Bratislava, means for the Basque Minister of Security, Estefanía Beltrán de Heredia, “the recognition by European forensic specialists of the high level achieved by the Basque police in scientific research and an opportunity to enhance relations and the exchange of information between our specialists and their counterparts in the rest of Europe”.

The decision approved in May 2014 in Bratislava by the majority of the members of the ENFSI (European Network of Forensic Sciencie Institutes) means that the Ertzaintza, specifically its Criminal Investigation Division and, within it, the Scientific Police Unit, will be responsible for organizing and hosting in its facilities, in May 2016, the heads of police laboratories attending the 28th annual meeting of the body. “For the Ertzaintza – says Beltrán de Heredia – it is a great opportunity to consolidate all the effort that has been made in the field of forensic investigation and will serve for the European police, especially those of the Schengen area, to know first hand the preparation of our specialists, their facilities and the resources they have. Furthermore – he points out – events of this nature, which attract top level international experts, are perfect for making the reality of the Basque Country known and promoting its potential in other fields, apart from the police”.

The annual meetings of ENFSI directors aim to discuss executive aspects of the organisation’s own functioning, its economic situation, the verification of strategic plans, the state of projects, the results and evolution of the working groups and the verification of European funds for financing research projects, among other matters.

​The Ertzaintza, a full member of ENFSI since 2006

The Ertzaintza certified its entry into the ENFSI in December 2006, as a full member, following the favourable decision of its Board of Directors and once its specialists had confirmed the technical level of the Basque Forensic Science Police and the degree of development of its laboratories, procedures and working protocols (accredited by the ISO 7025 quality certificate). The admission process, requested six months earlier, included the inspection by the ENFSI delegates of the UPC premises in Erandio, interviews with those responsible for the Unit, as well as the previous knowledge that the specialists had of the Ertzaintza’s work in forensic investigation.

ENFSI originated in 1992, when the directors of government crime laboratories in Western Europe decided to organise regular meetings to exchange information on topics of mutual interest. The first meeting was held in Rijswijk (The Netherlands) and was attended by 11 laboratories. Subsequently, they met again in 1994 in Linköping, Sweden, where a first Memorandum of Understanding was adopted. A year later, on 20 October 1995, the founding meeting was organised, which marked the official birth of the institution as we know it today. At that meeting, in addition to the initialling of the Agreement governing the functioning of the organisation, the first official Board and the logo of the organisation (the European eye) were elected.

From the outset it was agreed that ENFSI membership would be open to all European countries with the aim of ensuring, through their contributions, that the quality of the development and presentation of forensic science in Europe would be at the forefront of the world. It was soon consolidated as an organisation, with the formalisation of the institutional membership of the laboratories and the creation of a Secretariat under the leadership of the President. Since then it has grown rapidly: from the initial 11 members it has grown to the current 64 laboratories from 36 countries.